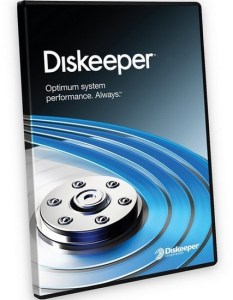 Condusiv’s Diskeeper® 16 Server with DRAM caching guarantees to solve the toughest performance problems on physical servers with faster than new performance, or your money back for 90-days – no questions asked. Instead of “defragging,” Diskeeper 16’s newest patented engine ensures large, clean contiguous writes from Windows so fragmentation is no longer an issue for HDDs or SSDs. This eliminates the “death by a thousand cuts” scenario of many, tiny writes that inflates I/Os per second, robs throughput, and shortens the lifespan of HDDs and SSDs alike. Diskeeper 16 electrifies Windows system performance to operate faster than new with the addition of dynamic memory caching – using idle DRAM to serve hot reads without creating an issue of memory starvation or resource contention

Proactive and Efficient Server Performance Optimization
Where typical defragmentation utilities consume resources to operate and deal with fragmentation only after the performance penalty has already been incurred, Diskeeper 16 is the only proactive solution that solves the problem in real-time while running transparently in the background, eliminating fragmentation issues from occurring on HDDs, SSDs, and SAN storage systems while also eliminating the IOPS inflation from many small writes and reads. Diskeeper 16 boosts performance faster than new with DRAM caching. The real genius in Diskeeper’s newest engines is that nothing has to be allocated for cache. Diskeeper dynamically uses only what is available at any given moment and throttles according to the need of the application. If memory is under provisioned and the application asks for all the memory, the caching engine throttles back entirely. However, with as little of 3GB of available DRAM, latency is reduced by an average of 40% on production workloads. 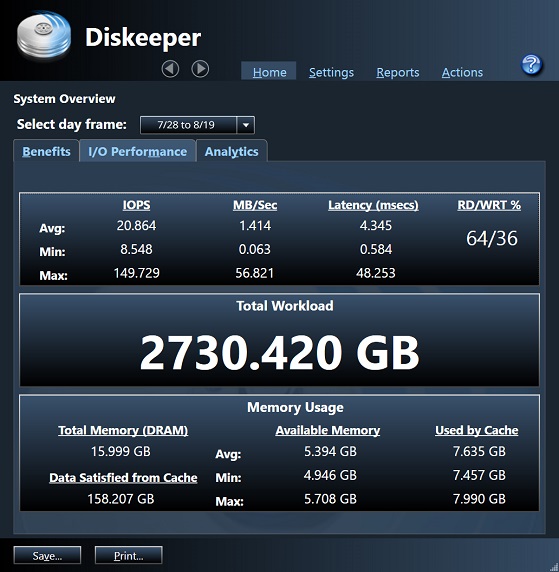 What’s New in Diskeeper 16:
• IntelliWrite® write I/O optimization technology prevents files from being fractured and broken apart into pieces, with each piece requiring its own I/O operation before being written to disk or SSD in a non-sequential manner. This stops the Windows phenomena of fragmentation from occurring before it becomes a problem.
• IntelliMemory® read I/O optimization technology intelligently caches active data from read requests using idle server memory. This further reduces I/O overhead to the underlying storage device, enabling organizations to get more performance and life from the hardware they already have.
• InvisiTasking® intelligent monitoring technology allows all “background” operations within the system to run with near-zero resource impact on current activities.
• Benefit Reporting dashboard displays the actual “time saved” benefit on every system so the value is easily quantifiable and never in question. It also shows fragments eliminated and what that means to percentage of write and read I/O reduction and how much I/O time was saved on that system due to writing and reading files in a sequential state as opposed to fragmented state. It also shows the percentage of all read traffic that is cached from idle DRAM and what that means to time saved by serving reads from DRAM instead of the underlying storage device. See displays for free spaces consolidated and total I/Os removed from both write and read optimization and total time saved for any given period of time.
• I/O Performance Monitoring reveals key performance metrics like IOPS, throughput and latency. It reveals the amount of workload processed on the local system for any given time period. It also provides important memory usage information like total physical memory and min/max/avg of available memory and how much of that was used for cache. This helps administrators fine tune memory allocations to get the most from the IntelliMemory DRAM caching engine. If there is not sufficient available DRAM, users are not getting the best performance possible from Diskeeper.
• Analytics provides an hour-by-hour view for any time period to understand exactly what is happening on the local system related to key metrics like workload, read/write percentage, IOPS, throughput, I/O response time and benefits like write I/O reduction from IntelliWrite and read I/O reduction from IntelliMemory.
• Instant Defrag™ technology has been enhanced to monitor volumes to resolve critically fragmented files in real-time that are known to cause performance problems. This feature is turned off in the event of solid-state drives. This is the perfect complement to IntelliWrite in the rare instance that not all fragments were eliminated in the first place.
• HyperBoot® File Access Technology strategically moves files into a sequential order that minimizes the number of I/O requests during the boot process.
• HyperFast® SSD Optimizer Technology produces faster performance in solid-state drives running on Microsoft operating systems. The HyperFast feature includes TRIM functionality and is enabled only if a solid-state drive is recognized.
• Terabyte Volume Engine® Technology engineered to rapidly defragment volumes with hundreds of thousands of files.
• Efficient Mode in addition to an extensive defrag mode, Efficient Mode offers the greatest net gain in system I/O resource savings ever available. It immediately targets and eliminates only fragmentation that directly affects system performance that is on the system and Diskeeper automatically prevents most fragmentation after installation.
• Free Space Consolidation Engine swiftly consolidates free space and tightly integrates with Instant Defrag to handle new fragmentation as soon as it is created.
• Network Management Support ensures easy management of Diskeeper 16 settings and functionality across the network through the Diskeeper 16 Administrator edition or Group Policy.