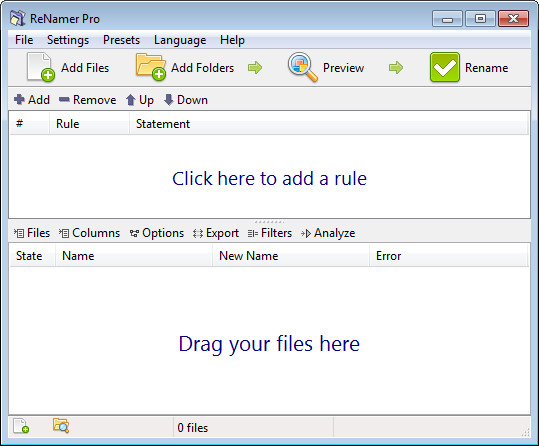 ReNamer is a very powerful and flexible file renaming tool, which offers all the standard renaming procedures, including prefixes, suffixes, replacements, case changes, as well as removing contents of brackets, adding number sequences, changing file extensions, etc. For advanced users, there is a PascalScript rule, which let users program their very own renaming rule.

Program allows you to combine multiple renaming actions as a rule set, applying each action in a logical sequence, which can be saved, loaded, and managed within the program. In addition, it has an ability to rename folders, process regular expressions, Unicode capable, and supports variety of meta tags, such as: ID3v1, ID3v2, EXIF, OLE, AVI, MD5, CRC32, and SHA1.

What’s New:
ReNamer 6.6 brings a new renaming rule and few other useful features.
Here is the summary of most notable changes:
Added a new “Padding” rule, used for adding and removing zero padding in number sequences. No more need to use clunky regular expressions for this common task.
Implemented an {$INCLUDE} directive in PascalScript, which allows sharing and linking together multiple source code files. A common use case is to have a collection of useful routines in a single easily maintainable file, which can now be easily included in your everyday scripts.
Added Czech translation file. Thanks to Lukas Kucera.

Full list of changes:
* Added a new “Padding” rule, used for adding and removing zero padding in number sequences.
* Increased height of the Add Rule dialog to fit an extra rule.
* Added “Export paths to clipboard” option.
* Fixed incorrect replacement of consecutive “Find” parts. Regression introduced in v6.3.0.3.
* Other small improvements.
* Handle included files with full paths in PascalScript.
* Improved error message when an include file is not found in PascalScript.
* Changed shortcut in PascalScript editor for deleting the current word from Ctrl+T to Ctrl+W, to avoid collision with the shortcut for “Try to Compile” button.
* Added an example script to demonstrate the use of {$INCLUDE} directive in PascalScript.
* Added Czech translation file. Thanks to Lukas Kucera.
* Updated Russian language file.
* Implemented an include directive in PascalScript, i.e. “{$I filename.pas}”.
* Fixed incorrect display of local Unicode thousand separator.